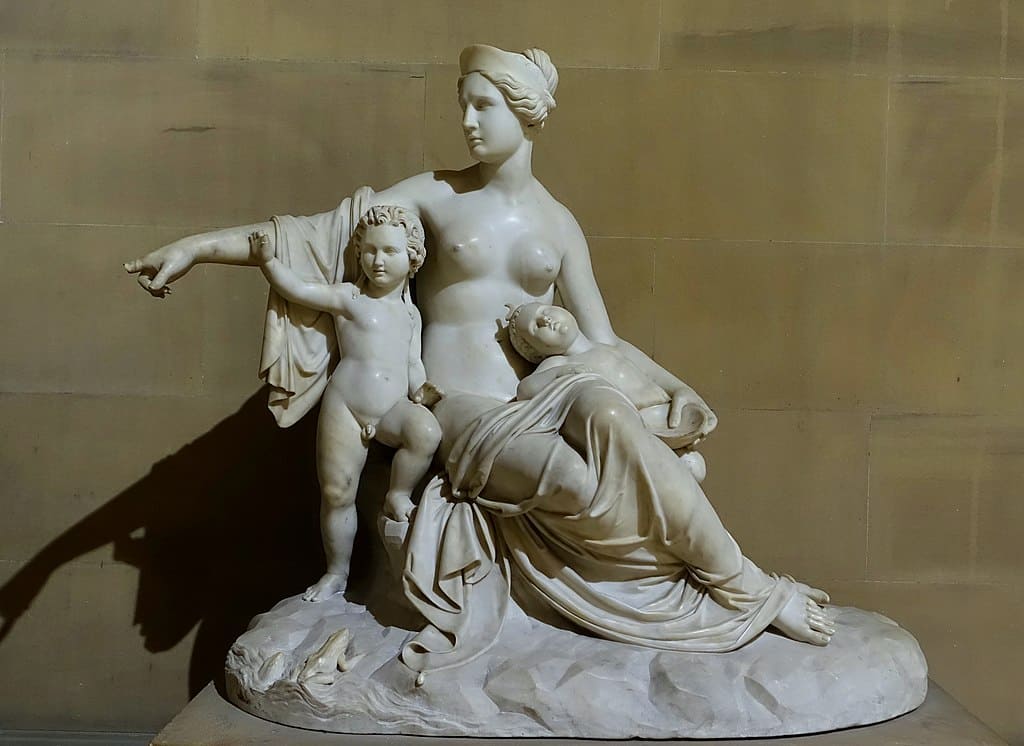 Greek mythology is filled with the stories of divine and brave female heroes, famous for their deeds and accomplishments. Many of these female figures served as examples of imitation to the Greeks, who looked up to them and considered them a source of inspiration. This article presents some of the most popular women of Greek mythology.

Pandora was the first mortal woman, crafted by Hephaestus on the instructions of Zeus. She was held responsible for releasing the ills of humanity into the world by opening a jar, known as Pandora’s box. Thus, the Pandora myth is considered a kind of theodicy, addressing the question of why there is evil in the world.

Helen of Troy, also known as beautiful Helen, was the most beautiful woman in Greece. She was the daughter of Zeus and sister of the Dioscuri. During the absence of her husband Menelaus, king of Sparta, she fled to Troy with Paris, son of the Trojan king Priam, an act that ultimately led to the infamous Trojan War.

Daughter of king Aeetes of Colchis, niece of Circe and granddaughter of the sun god Helios, Medea is most notably known for her participation in the story of Jason and the Argonauts, where she aids Jason in his quest for the Golden Fleece out of love, assisting him with magic, before eventually fleeing with him to Corinth.

Penelope was a daughter of Icarius of Sparta and the nymph Periboa. She was the wife of the Trojan hero Odysseus, and her name is traditionally associated with marital fidelity, since he remained loyal to her husband despite having many suitors while he was absent.

Arachne is the protagonist of a tale appearing in the work of the Roman poet Ovid. According to the myth, Arachne, a talented mortal, challenged Athena, goddess of wisdom and crafts, to a weaving contest. When Athena could find no flaws in the tapestry of Arachne, she beat her with her shuttle. Out of shame, Arachne hung herself, and she was thus transformed into a spider.

Ariadne was a princess in the island of Crete, daughter of Pasiphae and the Cretan king Minos. She was mostly associated with mazes and labyrinths, since he fell in love with the Athenian hero Theseus, and she helped him escape the Labyrinth and kill the Minotaur, a beast half-bull and half-man that dwelled there.

Considered one of the most famous heroines of Greek mythology, Atalanta was a renowned and swift-footed huntress. When she was born, she was left on a mountaintop to die, but a she-bear suckled and cared for her until hunters found and raised her. She is also famous for killing two centaurs, Hylaeus and Rhoecus, who attempted to rape her.

Clytemnestra was the wife of Agamemnon, king of Mycenae, and the sister of Helen of Troy. In Aeschylus’ Oresteia, it is said that after starting an affair with Aegisthus, with whom she plotted against her husband, she murdered Agamemnon and the Trojan princess Cassandra, whom Agamemnon had taken as a war prize,

Danae was a princess of Argos and mother of the hero Perseus. According to myth, while she was locked in a tower by her father, Zeus appeared in the form of golden rain and impregnated her. By the providence of the gods, she and her child, Perseus, made it safely to the island of Serifos. Danae is also credited with founding the city of Ardea in Latium during the Bronze Age.

A minor figure in Greek mythology, Daphne was a naiad, a kind of female nymph associated with fountains, wells and springs. A daughter of the river god Peneus, it was said that her beauty caught the attention of the god Apollo who fell in love with her. In order to save her from the advances of the god, Peneus transformed her daughter into a laurel tree, which became the sacred tree of Apollo.

Andromeda is the daughter of the king of Aethiopia, Cepheus. When Zeus sent the sea monster Cetus to punish the kingdom for queen’s Cassiopeia hubris, Andromeda was chained to a rock as a sacrifice to the monster. However, the princess was saved by the hero Perseus, who took her to Greece and married her.

In Greek mythology, Eurydice was a nymph, one of the daughters of the god Apollo, and the wife of Orpheus, the legendary musician, and poet. After her death by snakebite, Orpheus tried to bring her back from the Underworld but failed, since he turned his head to look at her before reaching the surface, thus losing her forever.

Click here for the story of Orpheus and Eurydice.

Lito is the daughter of the Titans Coeus and Phoebe and the sister of Asteria. She was impregnated by Zeus, and after reaching the island of Delos, she gave birth to the god Apollo and the goddess Artemis. Leto has been plausibly identified with the Lycian goddess Lada; she was also known as a goddess of fertility and as Kourotrophos.

In classical mythology, Circe was an enchanter or a sorceress, the daughter of the god Helios and the Oceanid nymph Perse. By means of drugs and incantations, she was able to transform humans into wolves, lions and swines. In the Odyssey, the Greek hero Odysseus visited her island and stayed with her for a year before resuming his journey.

Calypso was the daughter of the Titan Atlas or Oceanus, a nymph of the mythical land of Ogygia, and one of the most famous women in Greek mythology. According to the Odyssey, she detained Odysseus for seven years on the island. However, she could not overcome his longing for home even by promising him immortality, and so she was forced by the gods to let him return to Ithaca.

18 shares
We use cookies to ensure that we give you the best experience on our website. If you continue to use this site we will assume that you are happy with it.Ok