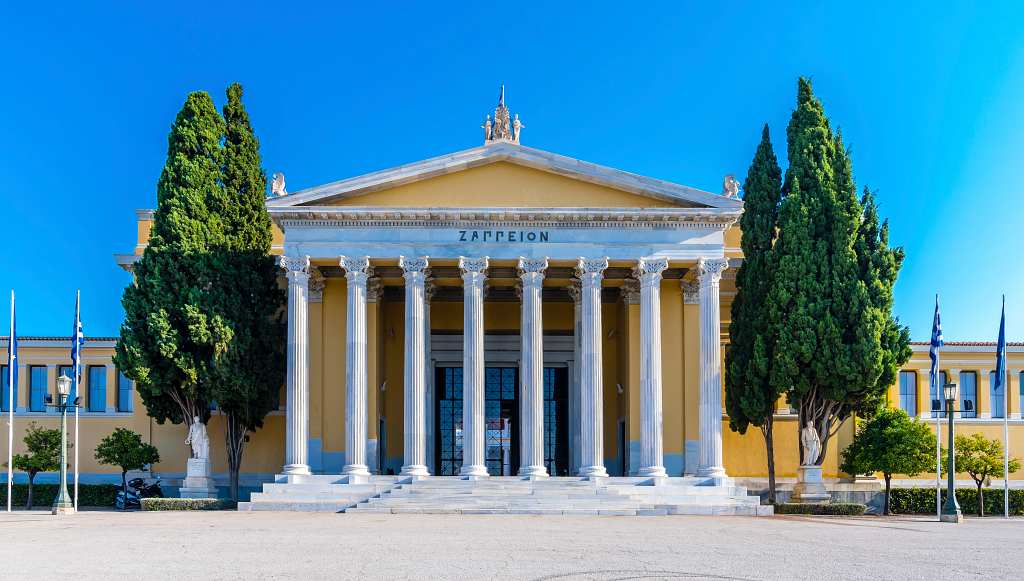 Situated within the National Gardens of Athens, in the heart of this vibrant city, the Zappeion is a large elegant building that today is an exhibition center and a much-loved landmark in Athens. Over the years, the Zappeion has been used as the Olympic Games Village, a hospital, barrack block, and storehouse! Its construction was funded by a benefactor, who also had an interesting story.

Evangelis Zappas was a wealthy Greek businessman who was born in Epiros had made his fortune in Romania and had fought in the Greek War of Independence (1821-1832). Following the war, Zappas wanted to revive some of the old Greek traditions in the new state. He felt that the highest priority should be the creation of a modern style Olympic Games.

He persuaded King Otto that his idea was a good one and provided enough money for the Olympic Trust Fund to be established. He was delighted when the first Olympic Games took place on 15 November 1859 in the main square in central Athens and was deemed a great success.

Zappas gave more funding so that the games could be held at the Panathenaic Stadium, but he died n 1865, five years before the next Games – called the Zappeion Olympiads- took place. When he died, Zappas left money and building instructions for an Olympic building – the Zappeion Conference and Exhibition Centre – or as everyone affectionately calls it, the Zappeion.

The design for Zappeion was drawn up by the Dutch architect Theophil Van Hansen and work began on the project in 1874 but was not completed for 14 years. The Zappeion Conference and Exhibition Centre was officially inaugurated on 20 October 1888 and was one of the first conference centers in Europe and was also the first building dedicated to the Olympic Games.

The Zappeion building is both stylish and impressive, with the front Corinthian portico decorated with eight tall Corinthian columns. The main part of the building is on two floors, built in a symmetrical design around a large central atrium. There are two side wings – each with a covered courtyard. The main building has 25 main rooms and 4,000 square meters of exhibition space. The central atrium is beautiful and covers 984 square meters making it possible to seat 350 guests for dinner.

During the 1896 Olympic Games which were held in the new marble Panathenaic Stadium, the fencing competition was held in the atrium of the Zappeion, and in the 1906 Olympic Games, the Zappeion was used as the Olympic Village, providing accommodation for the participants. Three years later, the center was the setting for an international exhibition of entertainment which attracted many foreign exhibitors and saw the showing of the first motion picture in Greece.

In 1936, the Zappeion became the home of the first state radio EIR and remained so for 40 years. In 1940, during the Second World War, the building became a hospital, but soon after was commandeered by the Occupying German Army and it was used as a giant storeroom and barrack block. Zappeion was bombed in 1944.

For some years the building lay neglected but in 1955 the Zappeion was renovated and the same year was the setting for an exhibition by Picasso and later, one by Caravaggio in 1962.

In 1962, the Zappeion hosted the Spring Conference of NATO and on 1 January 1981, it was in the Zappeion that the Greek Prime Minister, Konstantinos Karamanlis, signed the documents for Greece’s accession to the then European Economic Community (EEC).

Two years later, the Zappeion was the Headquarters for the Greek Presidency of the EEC (Which became the EU with the Maastrict Treaty in 1992). The Zappeion was completely renovated inside and out in 2004 as it was used as the press center for the Olympic Games which Greece hosted that year.

The Zappeion is regularly used for all types of exhibitions, congresses and other events which include an annual antique and art exhibition and the bi-annual fashion week. Why not enjoy a lovely walk in front of the Zappeion and then through the gardens. There is an outdoor cinema and coffee shop and restaurant to tempt you!

* The Zappeion is situated in the National Gardens and east of the Temple of Zeus. The Zappeion lies just a short walk (5 minutes) from Syntagma Square in the center of Athens.

* The nearest Metro stations are Syntagma Square (Line 2 &3) and Acropolis. Both are just a few minute’s walk.